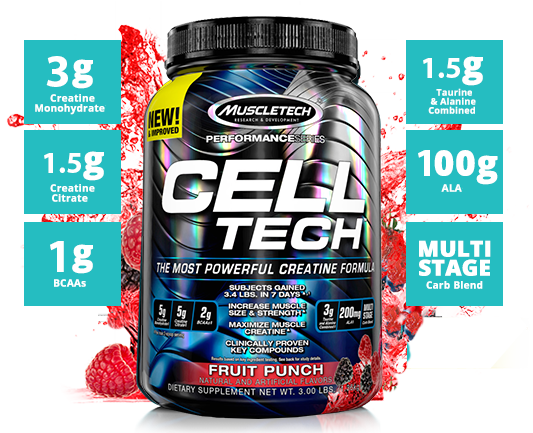 Regular creatine was welcomed as the next generation of supplementation and was unleashed to help bodybuilders and other athletes get bigger than ever! For the most part, regular creatine delivers solid muscle size and strength gains. However, even as great as creatine is, there are clinically proven ways to make it better.*

If you’ve been taking straight creatine monohydrate, it’s really just the tip of the iceberg. Researchers at MuscleTech® knew this and, after years of testing, created CELL-TECH™ – a true third generation creatine formula that harnesses the anabolic power of insulin and is so powerful that it has not only stood the test of time, but has become legendary for its ability to pack on mass, size and strength like no other creatine formula before or since.* 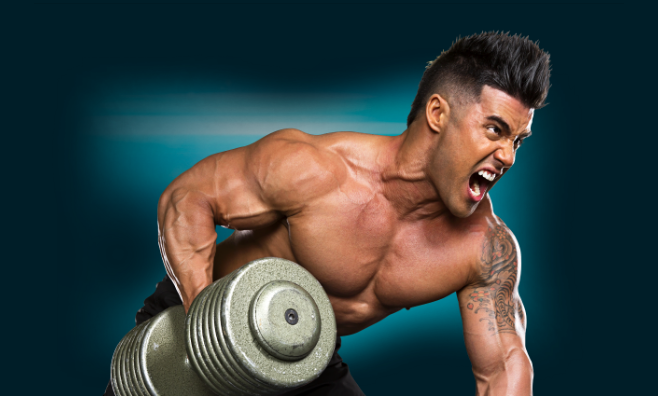 Years of study by top human performance researchers has confirmed that insulin is one of the body’s most powerful musclebuilding hormones. In fact, research published in the Journal of Clinical Investigation found that insulin is so potent it could support protein synthesis in skeletal muscle!1 Insulin is also very anti-catabolic and suppresses protein degradation and stimulates cellular hydration – causing water retention within the muscle cells that translates into greater protein synthesis.*

Early creatine researchers also knew the power of insulin, and in some of the first research published in the American Journal of Physiology, it was discovered that taking creatine along with a high dose of simple carbohydrates could trigger as much as 60% better creatine storage in the muscles.2 Researchers reporting on their findings confirmed that insulin was the key to pushing more creatine through muscle cell membranes.*

The purpose of insulin in the body is to regulate blood glucose levels. When an elevation of blood glucose occurs, the beta cells of the pancreas secrete insulin into the portal vein (the “spike”). Ultimately, insulin works by triggering the movement of nutrients from the blood to the cells.* 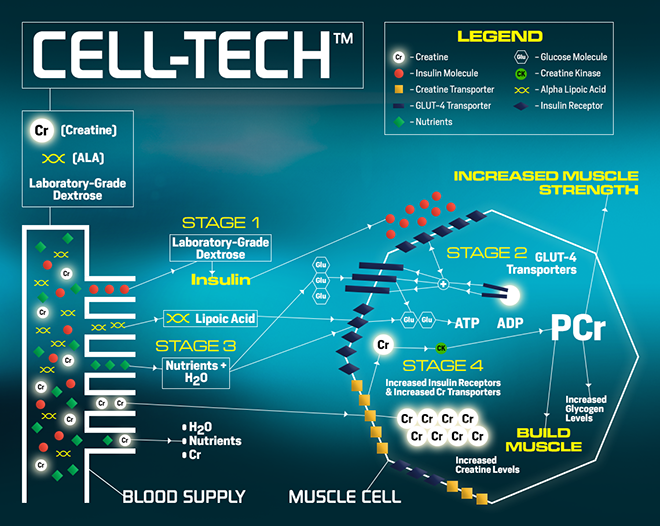 Insulin needs to attach itself to receptors in order to have any effect. This is what determines how much of the glucose, amino acids and creatine in your blood are taken up by the cell transporters. In your muscle cells, there are two glucose transporters: GLUT-1 and GLUT-4. However, it’s the GLUT-4 receptors that are predominant in adult human muscles, and they play an important role.*

GLUT-4 transporters migrate from the cytoplasm right to the cell surface in response to insulin and muscle contraction (lifting weights). Yes, training can actually increase the ability of your muscles to take in more nutrients because training increases the number of available receptors on the muscle membrane. The more available receptors there are, the more glucose, amino acids and creatine can be absorbed from the blood.<*/p>

This, in essence, creates the perfect anabolic storm – an optimal environment where insulin-sensitive muscle cells are able to quickly utilize anabolic nutrients like creatine, amino acids and glucose – priming them for incredible strength and massive muscular growth!*

THE MOST POWERFUL CREATINE FORMULA

CELL-TECH is a scientifically engineered hardcore creatine formula that is patent-protected and contains core ingredients supported by numerous clinical trials. Each two-scoop serving of CELL-TECH delivers 5g of HPLC-certified creatine monohydrate and 5g of creatine citrate. This dose of creatine is far higher than most creatine products, and yet those creatine products don’t utilize a delivery system! Ask yourself, how much creatine from these untested formulas is actually making its way into your muscles?*

CELL-TECH delivers a multi-stage combination of carbohydrates, including glucose polymers, dextrose, ModCarb™ (oat bran, quinoa, buckwheat, millet), waxy maize and highly branched cyclic dextrin totaling 75g per two scoops. After each max serving of CELL-TECH, insulin levels rise within the already normal range in the bloodstream, priming muscles for maximum creatine hypersaturation and retention. This is the key to CELL-TECH’s unique ability to support insulin levels beyond what regular creatine supplements are capable of. The anabolic rush generated by this exclusive carb blend is engineered to force glucose, creatine and amino acids into the muscles at levels that are unmatched by any other creatine formula.*

In fact, based on available published research, CELL-TECH is the fastest acting, most powerful advanced musclebuilding creatine formula ever developed, and once you see how dramatically and rapidly CELL-TECH can help transform your physique, you won’t want to consider using anything else!* 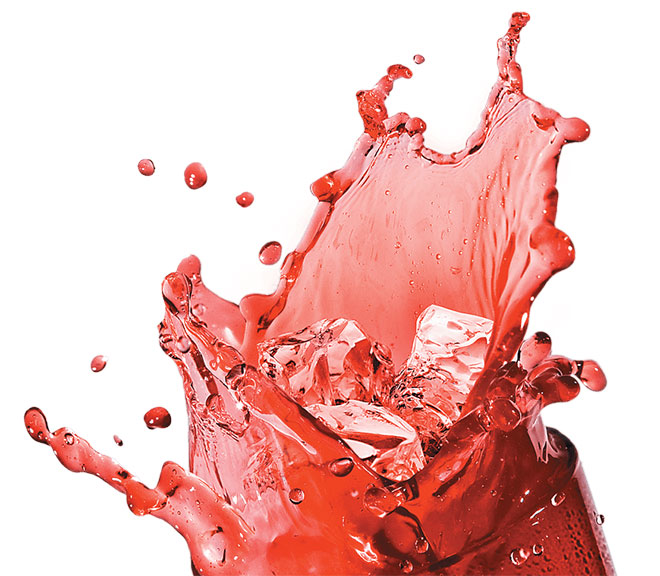 CELL-TECH delivers a multi-stage combination of carbohydrates that supports an insulin spike post-workout within the normal range.*

The powerful carbohydrates in CELL-TECH promote insulin output, enabling insulin to shuttle the massive 10g dose of creatine and other nutrients straight into the muscle.*

CELL-TECH contains a full 200mg dose of alpha lipoic acid (ALA). Research suggests that ALA helps improve the absorption of creatine and glucose into the muscle cell through specialized transporters.*

CELL-TECH is more than just a supplement that works in theory. It’s actually been put to the test in a clinical setting – further cementing its effectiveness! In fact, subjects who consumed the amount of creatine and carbohydrates supplied during the CELL-TECH loading stage gained, on average, 3.4 lbs. of muscle in 7 days. Subjects taking creatine with juice gained only 0.8 lbs.3

In a second study performed at McMaster University, test subjects who used CELL-TECH for 8 weeks significantly increased their strength on the bench press by 17%, leg press by 29% and biceps curl by 28% respectively.4

Each serving of CELL-TECH includes 200mg of the powerful compound alpha lipoic acid (ALA). Research suggests that ALA helps improve the absorption of creatine and glucose into the muscle cell through specialized transporters.*

A clinical study revealed that the use of CELL-TECH did not lead to the down regulation of creatine transporters. This allows athletes to continue to benefit from creatine use, instead of cycling on and off.5 This means you can use it all year long – just like protein. 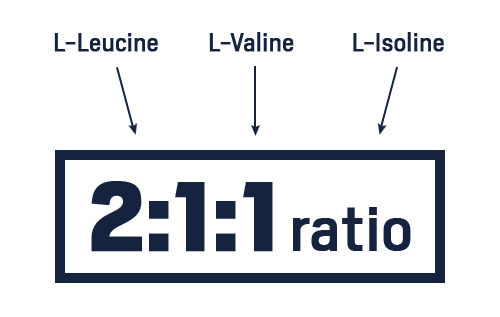 TESTED FOR QUALITY AND PURITY

Team MuscleTech ensures only the highest quality, pure, HPLC-tested creatine manufactured by one of the world’s largest producers of creatine is used for CELL-TECH™. In fact, each batch of CELL-TECH undergoes strict quality control and is third-party tested and verified to ensure that each bottle meets the highest standards of purity, quality and consistency. 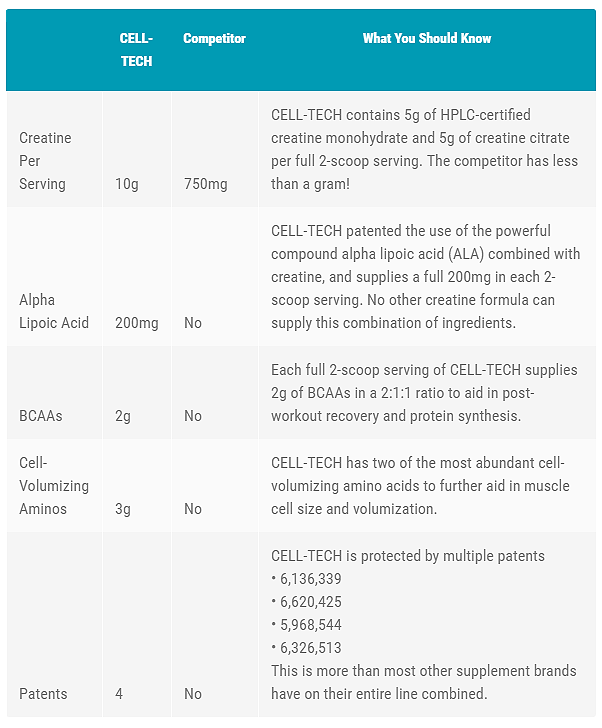 Reduction of Plasma Creatine Concentrations as an Indicator of Improved Bioavailability

There are no reviews yet.

Be the first to review “MuscleTech® Cell Tech” Cancel reply

We are a Nutrition & Supplement Store located in Stuart, Florida

We’re working to turn our passion for Nutrition & Supplement Products into a booming online store. We hope you enjoy our products as much as we enjoy offering them to you.